“The foot prints of the early saints are indelibly impressed on almost every hill, vale, island and streamlet, belonging to this expansive and historic parish.” These are the words used by Canon Maguire to describe the joint parishes of Cloughaneely in his History of the Diocese. Certainly, as a parish we are the inheritors of a rich ecclesiastical history. Folklore would have us believe that around the year 540 AD when Ireland’s monastic movement was beginning that a convention was held on a hill near Magheraroarty commonly known as Cnoc na Naomh (The Hill of the Saints). Four saints were present, Colmcille, Fionán, Beigbhile and Dubhthach. Each saint was hoping to claim Tory Island as his new territory.At this time Islands were seen as an ideal place to locate a monastery, a missionary’s paradise.

Colmcille suggested that in order to resolve who should go to Tory, each saint should throw his staff from Cnoc na Naomh. God’s providence would guide their staffs to the place where they should build their monastery. All agreed. Beigbhile was first to step up to throw his staff uttering, ‘By my strength and with God’s strength my staff will land in Tory.’ The staff veered eastward, landing in the townland known today as Ballintemple. This was where Beigbhile established his church – remnants of which are still to be seen today.

St. Fionan was next to throw his staff. He steadied himself and said aloud, ‘By my strength and God’s strength, my staff will land in Tory.’ Again the wind veered the staff in a North-easterly direction and it landed in the townland of Earrarooey where it split a rock. When he reached the spot where his staff had landed water was flowing out of the rock and its known today as Eás Fionan (Fionan’s waterfall). This he saw as a Divine sign and so he founded his Church and monastery in in the nearby townland of Ray.

Dubhthach was the next to throw. Using the same words he said, ‘By my strength and God’s strength my staff will land at Tory.’  His staff landed on the island between Innisboffin and Innisbeg. Here Dubhthach built his monastery.

Finally Colmcille stood up and looked out towards Tory. He rephrased the sentence that each of the other saint had used before they threw their staff, saying instead, ‘With Gods strength and my own strength my staff will land in Tory.’ The staff cut through the air and carried by the blessing from above it landed in Tory. The convention was over and each saint went his separate way. 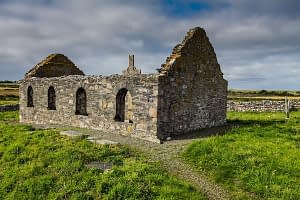 There is every reason to believe that St. Fionan’s monastery  stood in what is now the old Ray Church in which also stands the Highest Celtic Cross in Ireland, measuring over 21 feet by 7 feet. O’Clery’s Calendar details that Fionan, was the son of Piopan, of Teampal Rath in Cinel-Conaill and that he was of the race of Conal Gulban, son of Niall. St. Fionan’s feast day was the 25th of November.

St. Fionan’s monastery flourished into the early 1600’s, when following the suppression of the monasteries in Ireland the population celebrated their faith outdoors at local Mass Rocks, a number of which locations are in the parish, the nearest being in Ballyboes, less than a mile from Ray Church.

Mass continued at these places until 1786 when a Fr. Coyle erected a Church in Gortahork.  Initially a thatched building, it was rebuilt and renovated a number of times until the present Church, Eaglais Chríost Rí, was built beside it and consecrated by Bishop McNeely in 1952. 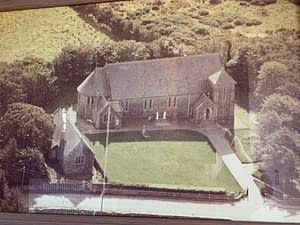 It wasn’t until 1878 that a foundation stone was laid for a Church in Falcarragh upon the land donated by Daniel Mc Swiney of Carrowcannon House. The Church, costing roughly £3,000 at the time, was built to match an adjoining school, which was built a few years earlier.  The Church was designed by O’Neill & Byrne, architects of Belfast and Dublin, and the contractors were Colhoun Brothers, Derry.

By the 1900’s the Church was in need or repairs due to damp and deterioration which it received in 1911.  The 70’s saw a change in attitude and it was considered that a new church was needed and as a result the old Church was sadly demolished and a new St. Fionan’s was erected on the same site.  The new church was opened on the 28th of November 1982 by Bishop Seamus Hegarty.  The Parish of Falcarragh was established shortly after with the then curate, the much-loved Fr. Patrick Mc Shane becoming the first Parish Priest. 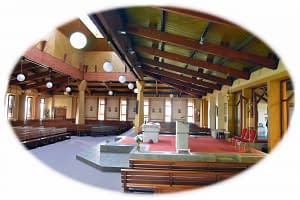